skip to main | skip to sidebar

October rolled in this week. For me, the fall begins on October 1st. This year, the weather obliged as there was definitely a shift toward colder, wetter conditions. Using some fall seasonal beers, I made some dinner. 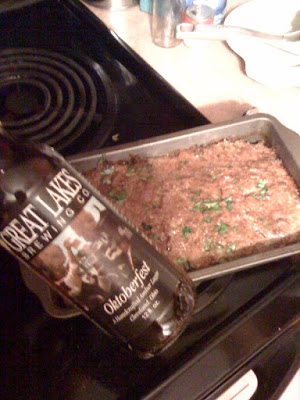 Meatloaf
I had to make some dinner and we had ground beef in the freezer, so I figured I could make a meatloaf. Several online recipes suggested adding some wine or various spirits to keep the loaf moist and add some richness. I figured there had to be something out there involving beer. I was right.

I found this recipe. I made about 2/3 of the recipe since I had two pounds of meat as compared to three. The key with the beer was to fry up some onions, pour in the beer, and cook it until it was thick (or about 3/4 of a cup).

The loaf turned out great. I could have done more with the flavors, but the beer insured it was moist. Speaking of the beer, I used a Great Lakes Octoberfest. The recipe called for a amber-colored beer, but I went with the fall seasonal from my favorite Ohio brewery. 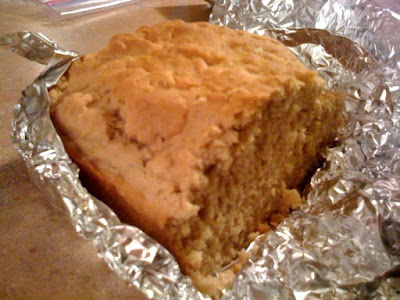 Pumpkin Bread
I stumbled over a pumpkin bread recipe a while ago that used a Dogfish Head Punkin Ale. That beer would be ideal as it uses real pumpkin as its primary ingredient. However, Dogfish Head is not available in MO, so I turned to a local favorite. Schlafly's Pumpkin Ale is one of the two or three best pumpkin beers I've ever had. This was the logical substitute.

The original recipe can be found here (although I reprint it word-for-word below). The only difference, again, was the beer. I'd suggest only using pumpkin beers by Dogfish Head, Schlafly, or Southern Tier. In my humble opinion, those are the only pumpkin beers worthy of consumption. The rest are spiced ales with some pumpkin pie flavoring.

The bread was good and contained a hint of pumpkin without being too pumpkiny or bright orange. I will certainly make this again, but I might add a tablespoon or two of some pumpkin puree to give it a little more pumpkin authenticity. I think it would pair well with a chocolate stout or maybe a porter. Also, I might try it with a black bean chili with chunks of yams.

In a large bowl, combine:

A dash each of cinnamon, nutmeg and ginger, but not too much, as you don't want to get in the way of the flavors Sam Calagione and co. have created.

Pour batter into a greased loaf pan, and bake for about 45 minutes, or until top is golden brown, and a toothpick comes out clean.

Posted by comoprozac at 9:20 AM